It seems impossible to go to bed. I couldn’t. It would be like missing the New Year; going to bed in 2017 and waking up in 2018. And so I have stayed up, even though I am alone, and even though it is not the New Year, only: my New Year. My book comes out in half an hour, the digital edition only. The paperback arrives in January.

I sat up late on March 8th, 2017, too. The weather was similar; a sort of blustery nothingness, sometimes much colder than expected, sometimes so close-feeling that sweat formed and I had to take my coat off while walking, try to hold its puffiness in my arms instead. I had no idea what to expect on March 9th. I had joked at the time to my boyfriend that I couldn’t see past that date. It had sounded dramatic, even to me, but now, I can kind of see why I thought that. Having a book published had been my ambition – no, not ambition; something more than that – a raison d’être? – since I had been old enough to know what an ambition was, and here it was, looming. But, with reality and not fantasy, there is often a reckoning. It had to sell. It had to be a success. Otherwise, it might end for me, right as it had begun, like a match that’s struck and inexplicably snuffs itself out.

I couldn’t have predicted all of the changes that have happened since March 9th, my last New Year. Small changes clustered next to large ones like diamonds amongst costume jewellery, and I am still sometimes unable to tell the difference. It became a bestseller, and so I became a bestseller; a label that is forever attached to me, on my novels, said about me at parties, and in jest when I am being pathetic about not wanting to put the bins out. The things I used to think were important: the verified Twitter tick, the approval of strangers, the acclaim. The things I now think are important are still there, like planets slowly circling a sun I have been too busy looking at: that my family love me, that my boyfriend wants to spend his life with me. The friends who text me on this night, twenty minutes before my book is published, saying: how are you feeling? And the writing, always the writing; my life’s heartbeat, strong and consistent. Promoting book one. Editing book two. Writing book three. Book two’s publication plans. Delivering book three. Starting book four. Putting book four aside to edit book three. Oh look: a message from a reader in Hungary who loved my debut. Like having a busy family of four children whose names I sometimes mix up. Picking up book four again. First draft, second draft, third draft. Plot crisis. Character crisis. Slowly slowly slowly solving the puzzle and falling in love, year on year. A different sort of New Year, but the same, too.

I couldn’t, either, have predicted the less flashy changes. The effect of the changes, maybe. Realising as I wrote late at night in April in a train station, gloves on my hands as I typed, that I needed to go part time. Waking up on a Monday recently, after I delivered my third book, with no novel to write and nothing to do and wandering downstairs and running a hand along my empty kitchen counter. The constant, demonic fear of my last book being the best thing I will ever write. The worry that a book will be uniformly hated. That not a single person will buy it.

As I write tonight, at now fifteen minutes to midnight, I don’t feel many of the things I felt on the 8th March. The reviews will be as they are for every other book in the universe – some stellar, some irate, some constructive, and wincingly insightful too – and the sales will be what they will be.

It’s ten to twelve, now. I’m sitting in my office. A hot chocolate and a candle on my desk. And – here, and now – there are no reviews, no sales to consider.

It’s midnight as I type my name into Amazon. I see the box at the top flick from pre-order to buy now. But it’s not that that catches my attention, that films my eyes with tears. No. It’s simply my name. My book. Everything else falls away. Here I am, a published author – building a canon, no less – able to type my own name into Amazon.co.uk, and find something there. 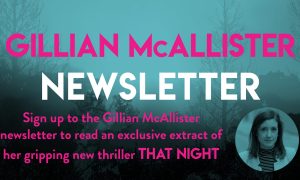